We propose to you a real estate project of investments in a residential area of Brasov, city considered to be in Romania the number one touristic objective of the country, the publication Wall-Street viewing it like “the most visited city in Romania”. 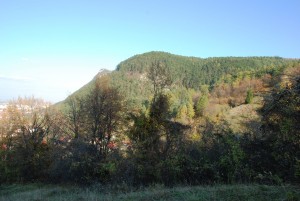 Brasov is an historical city certificated since the year 1292, situated at the foot of Tampa at an altitude of 600-650m. Named in the past, by the Saxons Kronstadt it was a powerful commercial center being situated at the crossroads of the three biggest regions of the country: Transylvania, Moldavia and Wallachia. Even today the city preserves in his old part (where the real estate project that we wish to present is situated) a medieval air, here being countless touristic sights from which we remind: The Black Church (with the oldest organ from the S-E of Europe), the Fortress of Brasov, the Schei Gate, Ecaterina’s Gate, the Council House, the Hirsher House, Muresenilor’s Museum, etc. The city of Brasov is a municipality for Brasov County where there are also many touristic sights from which we remind: the National Park Bucegi, Piatra Craiului National Park, Natural Preservations in the Ciucas Mountains, the Bran Castel, numerous fortresses and fortifications (the fortress of Harman, of Prejmer, Sanpetru, Rasnov, Fagaras, etc.), the Haller Castel from Hoghiz, cult references (Brancoveanu Monastery, Bucium Monastery, Evangelical Church of Rasnov, Reformat Church of Fagaras, etc.), museums (National Brasov, Ethnographic Sacele, etc.), touristic resorts (Poiana Brasov – at 12km from Brasov, Predeal – at 20km of Brasov, Paraul Rece – at 30km of Brasov, Zizin, Rodbav Baths- at 15km of Brasov, Timisul de Sus – on DN1, Persani Baths, Homorod Baths – at 15km of Brasov). 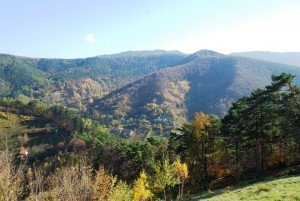 Since the settlement of the foundation stone, Brasov has been a cosmopolitan city and like that is found today also, many ethnic groups (Romanians, Saxons, Hungarians, Germans, Jews, etc.) and cultures that have passed through over the time have installed an unique aspect,  making it an alive city, dynamic and with many opportunities. So we find it today and even from an economical point of view, socially and cultural Brasov is situated among the first cities of Romania. The geographical location of the city in the center of the country was and still is a nodal point for investments. Among the latest investments of national and local interest is the rehabilitation of the infrastructure, making new road bypasses for the city (roads that are going to connect with the highway that will link Transylvania and Europe), making a new international airport at 15km from the center of the city in the area called Ghimbav. Many foreign investors have found Brasov to be a proper place for various investments, considering the industrial tradition, the fact that the city is a university town, the working hand is well prepared, the rail and road infrastructure is above the average of the country and the banking system is very well represented.

Keeping in mind these “ingredients” (touristic, economical, cosmopolitan) we have accomplished the opportunity of combining and harmonizing them into a project of 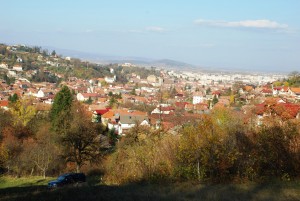 real-estate investment, into a concept.

In order to give live to this concept we surveyed the entire area with potential of Brasov, and we were ineluctable drawn by the old part of the town called Scheii of Brasov. This neighborhood situated at the foot of Tampa, full of history and with plenty of special natural surroundings is the place where this concept can come alive. The chosen area is in the middle of nature, being surrounded by the forests of the state (Romsilva Regia) or the property of the city hall (Kronstadt Forests). From this area start touristic marked trails that go: to “The stones of Solomon” (the place where take place annual local festivals like “Junii of Brasov”, etc.), to Tampa, to Poiana Brasov (the number one resort for Romanian ski) or to Postavaru. So even from the beginning we can easily say that the “touristic ingredient” is fully achieved here. Considering this point, in the urbanity project that we made in this part of the project was introduced an “area of tourism in protected area”.

So the studied area, by the urbanity project made by us, is composed from several plots situated within of the Brasov County, in the surroundings of the Schei neighborhood by south-vest. According to the General Urbanity Plan (“PUG”-Romanian term) of Brasov, approved by the Local Council with no. 144/2011, the area is included in the architectural reserve Urban Ensemble “Schei Brasov”. Most of the plots are lands free of constructions, with using category: grassland or woodland. There are several buildings erected adjacent to the Street “Dupa Gradini” (“After Gardens”), which is the main access road in the studied area.

In the period 2003-2007 we have purchased here a number of 13 plots, being covered with adjacent surfaces in the table below:

In the period 2007-2013 it was an intensive work for collecting data from the field (topographical and geotechnical projects for almost 50ha) and making the projects for the Urban Area Plan (“PUZ”-Romanian term).

The image below represents the plots we bought, superposed on the ortophotomap of the area Schei: 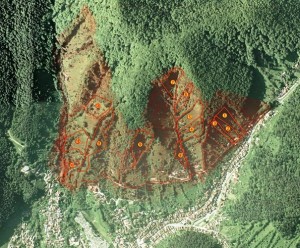 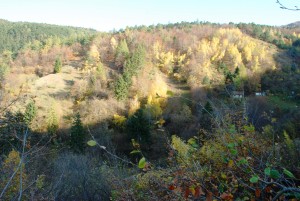 In the residential places from the protected area (the architectural reserve within the Urban Ensemble “Schei Brasov” at indicative Bv-II-s-B-11296) it seeks to maintain the specific of Brasov of “green city”, through discouraging of building in the areas with forests.  The aim is to develop residential areas with broken front and visible gardens from the street.

The residential functions, the green spaces area for relaxing, the recreational places, the amusement parks and the stand-alone holiday houses, established with the UGP (“PUG”-Romanian term), have been kept and has been introduced the tourism function and the one of facilities afferent of residential  and of recreational areas. Some areas with destination of residential have changed the function into mixed area, touristic or complementary facilities area.

The plots adjacent to the Street Dupa Gradini (After Gardens) are keeping the residential function established through UGP (“PUG”-Romanian term), and the transition toward the touristic area, on to South, is made gradually by a mixed area (residential and tourism).

There have been introduced two areas of facilities that will be focused in two cores. One of them is in the area of access out of Podul Cretului Street, and the other one near the area occupied by recreation units. They are characterized by the presence of representative areas that will be attraction points not only for the studied area, but will serve the entire Schei of Brasov neighborhood.

All the green areas established in the UGP (“PUG”-Romanian term): V3a, V7 and V6 will now have the general destination of recreation units, recreations forests and amusement parks, recreation poles. This area will expand with a “green breach” on the Street Widrigangul Mic, where it used to be the old ski slide from “The garden of Timan”. The wish is to keep and restore it in the spirit of conserving the memories of the place. Now it is forbidden to cut down the trees without the local authority’s approval. 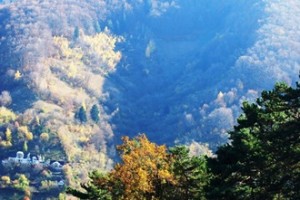 So, in order to harmonize the “economical ingredient” with the “cosmopolite” one, there has been made a zoning which to combine and to vary the potential constructions from the area. The functional zoning that has been made by the Urbanity Area Plan (UAP – “PUZ” (Romanian term)) considered the maximum occupation and usage possibilities of the land, in the natural existing conditions. The functional areas made by this project are:

1) ZL – the zone of individual and collective small housing in protected area, with the maximum height of P+1E+M (ground floor + one floor + mansard)

The area encloses the north part of the studied land, with an access way from the Street 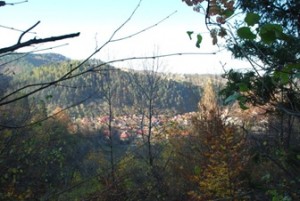 Dupa Gradini and another one new created – parallel with the Dupa Gradini Street, but at a level difference of +40m from it.  The aim is to preserve the character of the area – being a residential area.

There have been new created:

The minimum buildable surface of the plot will be of 1000 sqm and the street front of 15m. The plotting can be traditional, spontaneous as a result of partition in time of bigger plots or planned plotting.

The function of the area is mixed: living and tourism with complementary amenities.

The area is situated by south of the residential area, between the second and the third main circulation road (parallel with Dupa Gradini Street) and it is defined by a transition area between residential and touristic zones. 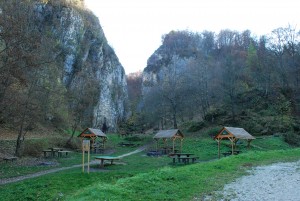 The minimum buildable surface of the plot for the holiday house will be of 1000 sqm with street front of 15m, and for the plots with villas and pensions will be of 2000 sqm with front of 20m.

The main function of the area will be touristic (with complementary amenities). So, there have been made: areas for holiday houses, villas, pensions, hotels and hotelier complexes, restaurants, coffee houses, public alimentation specific for tourism, services, commerce. 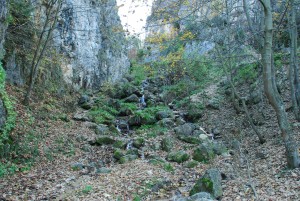 4) ZD – the area of amenities in protected area

The area of amenities is focused in two cores situated at opposed poles on the studied land. One of them is in the access point from the Podul Cretului Street, and the other one is in the proximity of the area occupied with recreational units.

The main functions are: commerce and services.

There have been created functions of malls (retail, commercial galleries, specialized shops), public alimentation units (restaurants, confectionary, coffee shops, bars), information centers, services and healthy equipments, services and education equipments (schools, kindergartens), company headquarters, offices. The plots are considered to be buildable is they have the minimum surface of 2000 sqm. 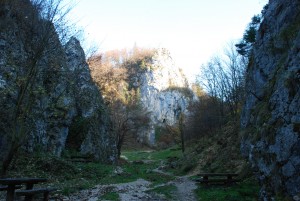 On the existing plots with surfaces smaller than the ones established in ZL, ZM, ZT, ZD there are maintained the same building conditions.

The zone includes lands within the build-up area, situated in the south part of the studied emplacement, outside the protected area. The function provided in the UGP (“PUG”-Romanian term) Brasov for these areas and it is extended with a “green breach” – the area of the old ski slide (Widrigangul Mic Streeet) with which is aimed to preserve the memory of the place.

The 13 plots that are the main reason for this presentation, after the approval of the Urbanity Area Plan (“PUZ” – Romanian term) will be with direct constructions approval. 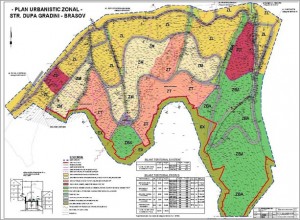 At the end, we would like to accentuate again, if necessary, a part of this project advantages:

-          “the cosmopolite character” of the project because of the possibility to build a variety of objectives: individual housing, villas, holiday houses, pensions, hotels, clubs, commercial centers, offices or sports units and recreational ones;

-          “the economical character” of the project that is addressing in our opinion to a social class- “middle class” that is aiming and has expectations to a complex residential area that will satisfy most of the comfort, privacy and standard of living necessities and that it is forward to pay for all these advantages;

-          the unique emplacement with an exceptional view, lands with different ascents, suitable for terraces buildings that ensures a wonderful view for all the buildings;

-          the closeness of the Natural Reserve “The Stones of Solomon”, with the small waterfalls, with the forests of fir and larch, with the chalk stones that are suitable for alpinism, with the arranged picnic spots;

-          the closeness of the old access road towards Poiana Brasov, restricted to the traffic and in the present only for lovers of hiking or mountain biking;

-          the fresh air from the huge forestlands nearby and the particular circulation of the air, that comes from the mountain ranges from the surroundings, not from the urban crowd from the city;

-          the possibility of making here a resort touristic-residential with reasonable investments;

We hope that all this presentation was useful and attractive and for further details, please contact us.